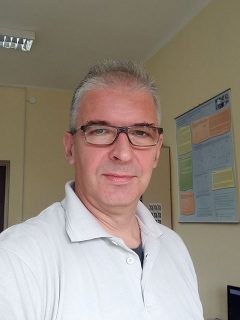 Born on January 28th, 1969 in Belgrade, he finished his elementary and high school education in Kladovo and graduated in 1997 at the Department of Wood Processing of the University of Belgrade – Faculty of Forestry. At the same Faculty he defended his magister work in 2006 and doctoral dissertation in 2012. Since February 1998 he became employee of the Faculty of Forestry as a teaching associate at the Cathedra for Chemical and Mechanical Processing of Wood, where he performed practical work on the courses of Auxiliary Materials, Wood Chemistry and Particleboards, fibreboards and wood plastic masses. In 2006 he became teaching assistant, and in 2012 he was promoted to assistant professor at the Department of Technology, Management and Processing of Furniture and Wood Products at the Faculty of Forestry. At the same department, now under the name Wood Technology, he was elected to his current title of associate professor in 2017.

He was mentor in two master and three diploma works, as well as a committee member for the evaluation of one doctoral dissertation, four master works and 10 diploma works. He published 40 scientific papers, of which 6 papers were published in international journals and 17 papers were presented on international conferences. He is a co-author of a book: Điporović-Momčilović M., Popović, M. (2012), Composite Materials of Comminuted Wood – FIBERBOARDS, Belgrade (ISBN 978 86 7299 210 6). He participated in realisation of two National technological projects, four international COST Actions and three studies in cooperation with domestic industry in the field of Wood technology. He is a member of the KS D089 Committee for the standards and related documents in the field of wood-based panels, of the Institute for Standardization of Republic of Serbia.

Chemical and Mechanical Processing of Wood