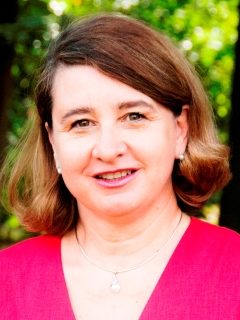 PhD Mirjana Sijacic-Nikolic was born in Belgrade on April the 19th 1968. She finished primary and high school in Sombor. In 1991she graduated fromn the University of Belgrade Faculty of Forestry. She defended her master thesis in 1995, and finally her doctoral dissertation in 2001. She was elected Assistant Professor at the Faculty of Forestry of Belgrade University in 2001, Associate Professor in 2007, and Full Professor in 2011.

She did her specialization in the lab for Biotechnology of the Institute for Corn “Zemun Polje” in Belgrade in 1999. Within international program «Conservation and management of forest genetic resources in Eastern Europe«, that was organized in Austria in cooperation between BMLUFW and IPRI, she participated in 2001. In 2005, she took part in the «Training Workshop on Forest Biodiversity«, that was held in Russia thanks to the organization of IPGR, CGIAR and BFW.

So far, she has published over 280 scientific papers related to forest trees genetic, plants breeding, conservation and sustainable utilization of forest genetic resources, and plant production.

During modifications of teaching plan and program at Faculty of Forestry in 2010, she initiated establishment of a new subject entitled “Conservation and sustainable utilization of forest genetic resources”, and she also wrote a book with the same title. She is a co-author of two university books: “Practicum of genetics with plant breeding” (2003 and 2013) and “Biology guide for the entrance exam” (2003, 2005, 2009, 2013). She wrote many books with tasks for “Forest genetics with plants breeding”, and she also made a bibliography devoted to Professor Aleksandar Tucovic (2005). She is a co-author of many chapters in domestic and international monographs, and among them, the most important is “Serbian Flora 2”, published by the Serbian Academy of Science and Art.

At the Faculty of Forestry of the Univeristy of Belgrade, she was vice president of the Forestry Department (twice), Head of doctoral studies at the Forestry Department, and also the Chairman of the Chair of Seed Science, Nursery Production and Afforestation (twice). During 2014-2016, she was a representative of the Faculty of Forestry in Biotechnical Sciences Council of the University of Belgrade. She has currently been the vice-dean for science and international cooperation.

In December 2012, she was elected a corresponding member of the Engineering Scientific Academy – Department of Biotechnology.

She is married and has a son.