Strict nature reserve has been protected since 1950 and was established to preserve the unique indigenous old well-developed stand of mountain beech forest which is 300 years old, with trees reaching a height of over 40 meters, and which is exempt from management and exploitation and thus preserved in its original form. It is located in eastern Serbia, in the area of North Kučaj, in the territory of the Municipality of Majdanpek, with an area of 15.28 ha and it is entirely state-owned.
Pursuant to Article 41a paragraph 2 of the Law on Nature Protection (“Official Gazette of RS” No. 36/09, 88/10, 91/10 and 14/16) and Article 42 paragraph 1 of the Law on Government (“Official Gazette RS ”No. 55/05, 71/05, 101/07, 65/08, 16/11, 68/12-US, 72/12, 7/14-US and 44/14), the Government of the Republic of Serbia issued a Decree on the proclamation of the “Felješana” Strict Nature Reserve, classified in category I of national or exceptional importance. 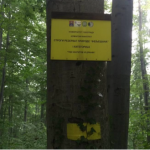 The “Crna reka” management unit, within which the “Felješana”SNR is located is on the slopes of the Homolje mountains, in the southwestern part of the Domain. It is a very interesting landscape due to the very dissected relief, which extends from 211 to 811 above sea level, due to the very diverse geological composition on a relatively small area and due to the very rich and diverse floristic composition. In the ‘Majdanpečka Domena’ Teaching Base Debeli Lug SRP “Felješana” is located at an altitude of 490-530 m, in northern exposure and on an indented and very steep and undulating terrain, with a 16-20 ° slope.

Majdanpečka Domena is an area that is particularly interesting in terms of floral composition. There are plant species that indicate the connection of the Moesian flora with the flora of the Dacian, Pannonian and Illyrian provinces, as well as with the Carpathian province. In addition, the South-Dacian -West-Mesoanian endemic species Campanula crassipes can be found here.
Majdanpečka Domena is a broadleaf area. Beech forests are especially dominant.
A significant number of medicinal plants also occur in Domena. A total of 222 species have been identified, including those that are rare or endemic.

In phytocenological terms, the “Felješana” SNR is a unique indigenous old well-developed monodominant montane beech forest, with a small share of dead cover, unfavorable humification process, sparse shrubs and low weediness.
Since beech forest communities dominate here, it is chatacterized by the presence of the fauna of European continental forests. 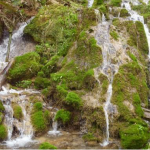 People are present in these parts mostly through activities related to forestry. It should be noted that the reserve is located near the settlement of Debeli Lug and the complex of mines Majdanpek. The fact that the natural environment in the vicinity of Majdanpek is significantly degraded, especially in the area of mining open pits and along them, particularly contributes to the importance of the reserve itself. The “Felješana” SNR is located very close to the mines of Majdanpek, Debeli Lug and the flotation lake. There are no mining activities in the vicinity of Crna Reka, except for small borrow pits of stone.
The general assessment of the state of the environment in this protected area is good, with preserved plant and animal species and unchanged natural features.