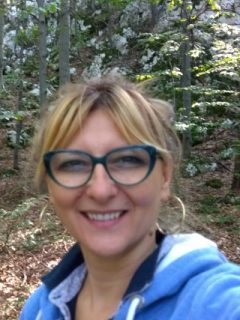 Dr. Olivera Kosanin was born on 25th October 1968. in Krupanj where she finished elementary and high school. She enrolled in the University of Belgrade- Faculty of Forestry in the 1987/88. school year, and graduated in 1992., with an average grade of 9.50, as the best graduate student of the generation. In April 1993., she started working at the University of Belgrade- Faculty of Forestry, as an associate at the Department of Forestry. She worked on the preparation of exercises in the course „Pedology for foresters“. She enrolled in postgraduate studies in Forestry- field of pedology for foresters, in the 1993/94. school year. By the decision of the Electoral Council of the Faculty of Forestry and the Professional Council of the University of Belgrade, on 16th June, 1995. she was elected as an assistant-trainee in the course „Pedology for foresters“. She defended her master’s thesis entitled „The role of organic matter in the evolution of soil morphology within the A-C stage on Deliblato Sands“ on 15th May, 2001., and acquired the academic title of „Master of Forestry Sciences in Forestry“.

After obtaining the academic degree of Master of Science, she was elected on 5th July, 2001., to the title of assistant for the narrower scientific field of Forest Ecology, course „Pedology for foresters“, that is „Forest pedology“, and re-elected for the first time on 10th June, 2005., and 25th September, 2009. for the second time.

She defended her PhD dissertation entitled „Podzolised acid brown soil in Serbia- forming conditions, properties, production potential and distribution“ on 17th June, 2011. and acquired the right to the academic title of Doctor of Forestry in the field of forestry.

Forest ecology, protection and improvement of the environment